Since the name Fernhurst is of Saxon derivation it is possible that Fernhurst had an earlier Church.  The present building is of Norman origin, dating from within fifty years of the Conquest and perhaps built by a soldier of the Cross in gratitude for his safe return from the crusades, as implied by the Church's dedication to St. Margaret of Antioch.  From the time of the early crusades over two hundred churches across the country took St. Margaret as their patron saint.  Her legendary deliverance from the dragon was celebrated in wall paintings, statuary and stained glass and her name invoked by women for protection in childbirth. 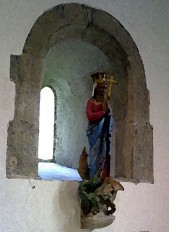 11th and 12th Centuries
The Norman Church consisted of the present chancel and nave and at the west end there was a timber-framed shingle-hung spire.  All that now remains of the original building are the font, some of the tie beams and the majority of the north wall with its two lancet windows - one in the chancel and one in the nave.  Note the width of the wall which gives a deep splay allowing maximum light into the Church.  Outside on the north wall there is a flat buttress built by the Normans to give additional support.  A small 12th century aumbry, with decoration probably added in the 14th century, was found on a gatepost some distance away and restored to the chancel in 1940. 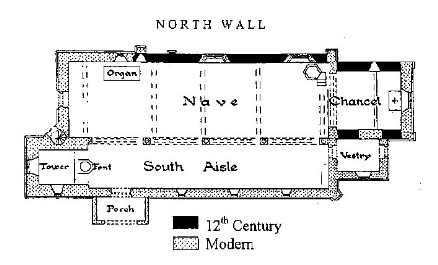 14th Century
Two Early English windows were inserted in the north wall of the nave at this time.  The original sill and parts of the mullion and jambs of the easterly one remain.  A window was also cut in the south wall of the chancel, but this was lost in the alterations of the 19th century.  It is known that there were wall paintings in the chancel, but the fragments which remained were inadvertently washed off during redecoration about 1914.16th Century
During this period an open porch or narthex was built against the south wall of the Church.  This was used as a shelter for churchgoers who had come some distance, and for their horses, and by the priest as a school.  A similar narthex can be seen at Lurgashall Church nearby. 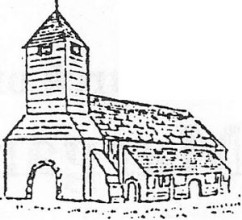 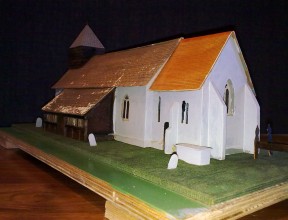 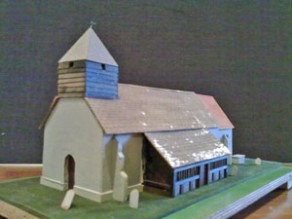 17th and 18th Centuries
The nave was filled with box pews at this time and a gallery built under the tower for choir and musicians.  It is recorded that, at one time, the barrel organ - a favourite instrument - was operated by the vicar's son.19th Century
This was the century of church restoration throughout the land and St. Margaret's did not escape.  In 1826 a rounded brick arch replaced the screen which had divided the nave from the chancel.  This was in turn replaced in 1859 by the existing pointed arch.  The Norman south wall was removed and an arcade introduced giving access to the narthex.  In 1881 and 1882 major alterations to the Church began.  The architect Antony Salvin, renowned for similar work in churches and cathedrals throughout the country, lived in Fernhurst and undertook extensive alterations.  The west wall, tower and musicians gallery were replaced by the tower and spire and vestry beneath at the west end of the south aisle.  The new east window and porch were added and the new west wall at the end of the nave, together with its door with a memorial window over, was installed.  It was at this time that some confusion led to effigies of St. Margaret and King Ma1colm of Scotland being placed outside over the west door instead of our St. Margaret of Antioch.  Finally box pews were removed and replaced by the present bench ones. 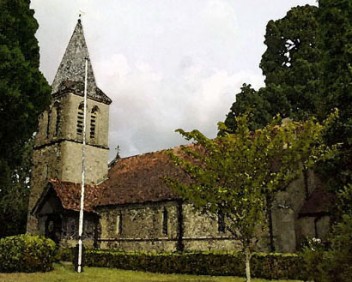 20th Century
A few alterations and additions were made.  The rood was erected in memory of our parish priest, the Rev. G. H. Ranking, who fell in the 1914- 1918 war.  Choir stalls were removed leaving an open chancel where our patron saint was installed in the Norman lancet window.  At the west end of the Church the font was moved to its present position near the south door to make room for the new organ, which was dedicated by the Bishop of Chichester in 1970 when a concert was given by John Birch, the then organist of Chichester Cathedral.  Two more memorial windows were added - one in the north wall of the nave and one in the Lady Chapel, and tapestry kneelers were worked by members of the congregation. 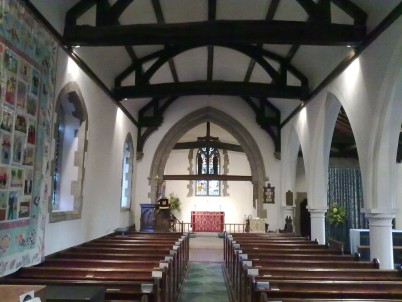